There are few things more exhilarating and romantic than experiencing a San Diego sunset over Point Loma – a seaside community on the Western edge of San Diego. For many, it’s the last stretch of land they’ll see for thousands of miles as they set sail into the expansive Pacific. 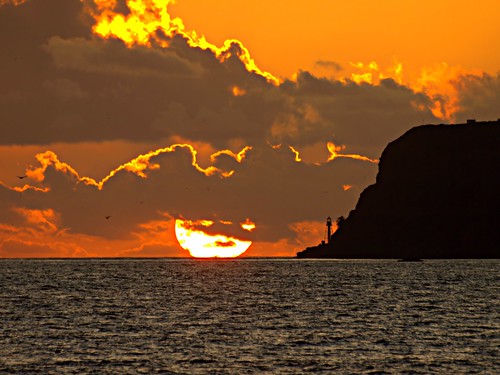 Photo courtesy of Art4TheGlryOfGod(CC No Derivatives)

Point Loma is a majestic peninsula towering over the ocean at heights of 422 feet. It’s known as the place “where California began,” as the first European explorers landed there in 1542. Perched atop the highest point is the The Old Point Loma Lighthouse –  a two-story structure built in 1854. In the photo above, you can see the old lighthouse and the new one situated closer to the point, and near sea level. If you round Point Loma and head North, you’ll see the “Sunset Cliffs”. These cliffs are a product of countless waves constantly eroding the sandstone over millions of years. It’s one of the few sites in California where dinosaur fossils can be found embedded in the rock. The ocean breaks just below these cliffs and has become a favorite among surfers, probably because you can only access it by boat (see surfing tour to Ralph’s/Point Loma).

The best vantage point in all of San Diego for a spectacular sunset is offered aboard a yacht exiting the Bay. Not only do you get an amazing palette of color, but it’s framed by stunning landmarks – all of which are reflected upon the water.

For us, a San Diego sunset cruise should be peaceful and serene. A sailing yacht accentuates the experience with only the sound of wind in the sails. There’s something about being out there, feeling the ocean move – the way people did hundreds of years ago. It’s even better when you’re there with someone you care about. You’ll feel safe and secure in the cockpit with blankets to keep you warm.

Here’s a recent picture from one of our sunset tours:

Most sailing tours will tuck in to the East of Point Loma near Ballast Point. It’s also where the early European explorers moored their ships and made their way to land. They camped on the beach – named “La Playa”. Just north is a neighborhood of the same name. It contains some of the most expensive private residences in all of San Diego. But south of Ballast Point provides the most remarkable view of Point Loma as the sun floods the evening sky with brilliant shades of red, orange, yellow and purple. This makes a nice segue into maximizing your enjoyment of a San Diego sunset sailing tour – beverages!

Ballast Point is also the namesake for one of San Diego’s best local breweries: Ballast Point Brewing Company. They’ve been brewing and distilling since 1996. We make several of their offerings available during every sunset cruise. Here are a few:

PUMPKIN DOWN – scottish ale with pumpkin

We also invite you to bring your favorite beverages onboard. For wine lovers, we have stemware and corkscrews!

When it comes down to it – what really makes a great sunset experience is a combination of being with a person you enjoy and an amazing view.