“Thar She Blows!” – Your Guide to Whale Watching in San Diego

The Pacific waters just off San Diego’s coast are one of the best places to observe the gray whale migration, making San Diego a worldwide destination for travelers wishing to get a closer look at these magnificent creatures. If you’re planning on watching gray whales this season (Dec – Mar) here’s what you need to know: 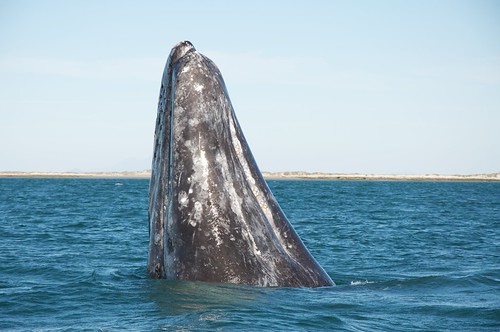 There are currently two populations of gray whales, the Western North Pacific which is very depleted due to over-hunting, and the Eastern North Pacific population which this article is primarily focused on. In the 1850s and again in the early 1900s, the Eastern Gray Whale population was hunted to near extinction. In 1947, they were given full protection under the International Whaling Commision (IWC). This has led to their numbers recovering to between 19,000 and 23,000 today – estimated to be close to their original population size.

Gray whales are a type of baleen whale and the only member of the family Eschrichtiidae. Although baleen whales are among the largest animals on Earth, they feed on some of the smallest organisms using rows of comb-like baleen which hang from their upper jaw. Baleen is made of protein similar to a human fingernail. It enables these whales to feed on zooplankton, amphipods, and tubeworms from the Ocean floor. To feed, the whale dives to the bottom, rolls onto it’s side, and draws sediment and water into it’s mouth. The water and sediment are then expelled through the baleen trapping the food inside the mouth to be consumed. A migrating gray whale follows a somewhat predictable pattern, blowing 3-5 times at the surface, then raising it’s fluke (tail fin) and diving under to feed for approximately 5 – 10 minutes before surfacing again. All of this happens while swimming at about 4 knots – roughly parallel to the shoreline.

Gray Whales are massive! They can grow to nearly 50 feet and weigh up to 80,000 pounds! They can be identified by their streamlined bodies, narrow tapered head, and mottled gray skin. They have no dorsal fin but instead have a dorsal hump with 6-12 knuckles which extend to their flukes.

Although the lifespan of gray whales is uncertain, it is estimated to be close to 80 years. On average these whales become sexually mature at 9 years of age. After a 12-13 month gestation, mothers give birth to a single calf that is 15ft long and weighs close to a ton.

The gray whale migration is the longest of any mammal on Earth, taking them as far as 15,000 miles from the Bering and Chukchi Seas to the lagoons of Baja California, Mexico and back again. Their migration begins in October each year with the purpose of mating and calving in Mexico.

Tips for Boaters while Gray Whale Watching in San Diego

Observing gray whales during their migration will likely be the highlight of any boater’s experience on the water but it’s important to understand that we are visitors in their environment and need to avoid disturbing these animals on their journey. Here are some tips to make the experience more enjoyable for the people and Whales involved:

Avoid Approaching from directly in front or from behind: It’s important to approach from a direction that does not surprise or startle the whale or force them to change direction. Instead, approach from the side so the whale can see you coming and continue feeding without distraction.

Minimize speed: Slow down to “No Wake” speed when nearing whales. They are only swimming at about 4 knots so there’s no need for you to be going any faster to observe them.

Don’t come between Whales: If you are coming between two whales in a pod you are probably way too close. Avoid this, especially when it’s a mother and her calf. Mother whales can be very protective.

Avoid Making Loud Noises: It may be tempting to try to get a whale’s attention by yelling or blowing a horn but don’t. Whales use sound to not only communicate but also to navigate and locate food. Studies suggest that excessive or prolonged exposure to noise pollution can cause behavior problems which can interfere with the health and survival of these animals.

Avoid Following for Too Long: A good rule of thumb is to not spend more than 30 minutes tracking alongside whales.

Consider Cumulative Effect: A few boats whale watching for 30 minutes may not overly stimulate or disturb a whale but 10 boats doing the same thing likely will. Keep this in mind and resist the temptation to proceed toward a whale that already has a large crowd near it.

Now that you know the basics, get on a boat and go watch some whales! The season for Gray Whale watching in San Diego will only be here for a couple more months (typically between December and March).